Building on the articles published in May 2017 by the Islington Gazette, this post (and others to follow) give further detail on the documents Fallen Angels produced.  First read (and watch) below:

In 1994 the International Lesbian and Gay Association (ILGA) would eventually vote to remove three paedophile rights groups (from the US and Netherlands) from their ranks. The UN had threatened to revoke ILGA’s NGO status and funding along with it. But 14 years earlier it had been a British group of pro-paedophile rights activists calling themselves the Fallen Angels that had first demanded IGA (as it was then) defend paedophiles rights and abolish the age of consent.

In April 1980 at the IGA’s second annual conference the Fallen Angels had a choice of sessions to attend at which they could raise their arguments for gay and women’s rights campaigners to back paedophile rights before attempting a push in plenary for an overall vote. At the time, five PIE Executive Committee members were awaiting trial and had handed in their passports as part of their bail conditions and so were unable to appear in person to rally international support.

Eight months’ prior to the IGA Conference in Catalonia,  a PIE legal defence campaign had formed almost as soon as the arrests had taken place. Future Fallen Angel Tim Brown, then of the London Gay Activists Alliance, wrote a lurid defence of paedophiles titled “Caged Anger. The Prosecutions of Paedophiles.” and circulated it at the CHE Annual Conference.

With sufficient promotion by various individuals at CHE’s Annual Conference (held over the August Bank Holiday in Nottingham) the movement to defend PIE’s Executive Members blossomed into the Conspiracy Against Public Morals (CAPM – also referred to by members as the Campaign Against Public Morals Committee) but divisions over publicity and campaigning style between the PIE defendants and the more militant members such as Fallen Angels would eventually lead to PIE denouncing the Fallen Angels.

Some members of the Angels had their roots in the Gay News Defence Fund and its successor Gay Activists Alliance which meant they wanted to focus their energies on public demonstrations and ‘zaps’, which jarred with the reporting restrictions placed at the three PIE committal hearings and the legal advice to the accused to defend the case on a civil liberties basis: freedom of association and speech for paedophiles. Here’s a letter from Tim Brown to Socialist Challenge written shortly after CAPM’s third meeting.

The IGA newsletter covering the Conference provided a report from the Workshops – one specifically on Pedophilia and Age of Consent and others on Political Action (Pending & Forthcoming).

To support their proposals to conference they circulated 3 documents:

The Angels won the support of conference to call for the abolition of age of consent laws as oppressive and for the discussion on ‘pedosexuality’ (as paedophilia was now being called to further enhance its legitimacy as a sexual orientation rather than a paraphilia or child abuse) to progress within the member organisations to report back to the IGA Information Secretariat run by Edmund Lynch in Dublin.

After reports from the Women’s Caucus’ discussion on the subject and from the Workshop the meeting discussed on the following draft resolution, which is an amended resolution as put forward by F-48 and COC:

1. Believing that all individuals should have the right to sexual self-determination irrespecitve of gender or age;

Considering that age of consent laws operate to oppress and not to protect;

This Conference calls for the abolition of all such laws.

Note: the concept of self-determination requires and demands laws to ensure that no individuals are coerced into sexual relations against their will.

2. Considering that paedophilia is, within member organizations, seen as a very complicated, highly emotive subject with far-reaching implications, about which is it not easy to reach a simple consensus;

Considering that our opponents use arguments concerning pedophilia against the idea of homosexual liberation;

Considering the possible consequences of a legal age of consent for the development of a gay and lesbian identity;

Considering that the legal use of the concept of ‘age of consent’ is often a fiction because it suggests that real consent cannot be given under a certain age;

Considering the need, especially for women, for protection against sexual violence;

Considering the place liberation of pedosexuality takes in the whole of sexual liberation;

Considering our distinctive ability, derived from our experience of oppression as gay men and lesbian women, to contribute to the discussion of the liberation of pedosexuality

3. It is resolved to continue discussion on the subject within IGA and to ask members to pursue a discussion on pedophilia within their own organization. Member organizations are requested to teel (sic ) the Information Secretariat (or other member-organization) directly of results of discussions and actions.

Bill George (COC/CHE) proposes to insert the word ‘fictitious’ before ‘age of consent’, discussion about this resulted in the line:

‘Considering that the legal use…’ Considerations of the draft-resolution are accepted.

The proposal was supported with a large majority, four people voted against and Peter Ashman (CHE) asked to record in the minutes that CHE voted against. It was resumed that COC will gather information and sent it out in order to continue the discussion on pedophilia.

The Campaign for Homosexual Equality’s (CHE) refusal to vote for the age of consent as a fiction or embrace ‘pedosexuality’ was noted by attendees, and not just for the record at IGA. It would later cause ructions amongst CHE and a push back from within the ranks for a more paedophile positive approach from CHE’s reluctant Executive Committee who rightly feared embracing paedophile liberation would damage CHE’s legitimate campaigning for parity with the heterosexual age of consent.

Fallen Angels were particularly scathing of groups like CHE and Albany Trust who they regarded as ‘reformist’ for lobbying piecemeal reductions in the age of consent when they considered it as oppressive to paedophile liberation and children’s liberation, campaigned for by them as two sides of the same coin.

Barry Prothero (GAA) called for demonstrations outside British embassies abroad when the European Court of Justice’s decision on the NIGRA case is announced.

Following Barry Prothero’s successful February 1980 application for the paid role of NCCL Gay Rights Officer (replacing Nettie Pollard, PIE Member No. 70 who’d been voluntary since the lapse of the Penthouse grant) he was attending the IGA Conference as a representative of NCCL and the London Gay Activists Alliance. He and Tim ‘Paedophile Love & Kisses’ Brown shared a house together at Davenant Road, where Fallen Angels listed its HQ as on the delegates address list.

It is the last proposal from the Fallen Angels that strikes me as the most chilling. They demanded that at the next IGA conference a creche should be provided, staffed only by men, for the full participation of women in the conference. Coming from a group

1. The Second Annual Conerence of the International Gay Association notes the complete failure of the organisation to provide adequate creche facilities for children, together with the male expectation that women would be responsible for those children that did arrive.

2. Conference therefore censures the organisations for their example of outrageous  sexist and ageist behaviour against children and women.

3. Conference therefore contacts the organizations of the next IGA Convention:

a) To provide a creche which is attractive to children and which fully provides for their needs; so that all potential delegates are able to bring children with them to thenext IGA Conference;

v) That the responsibility for the creche must be that of only men, so enabliing all women to fully participate in the Conference

After some discussion, the Convention accepted Proposal 3, but did not adopt Proposals 1 and 2 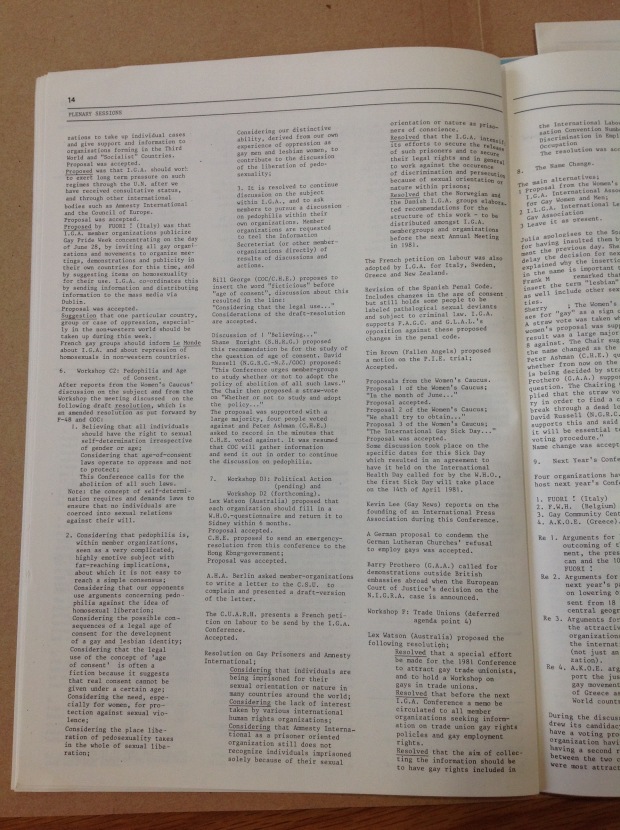 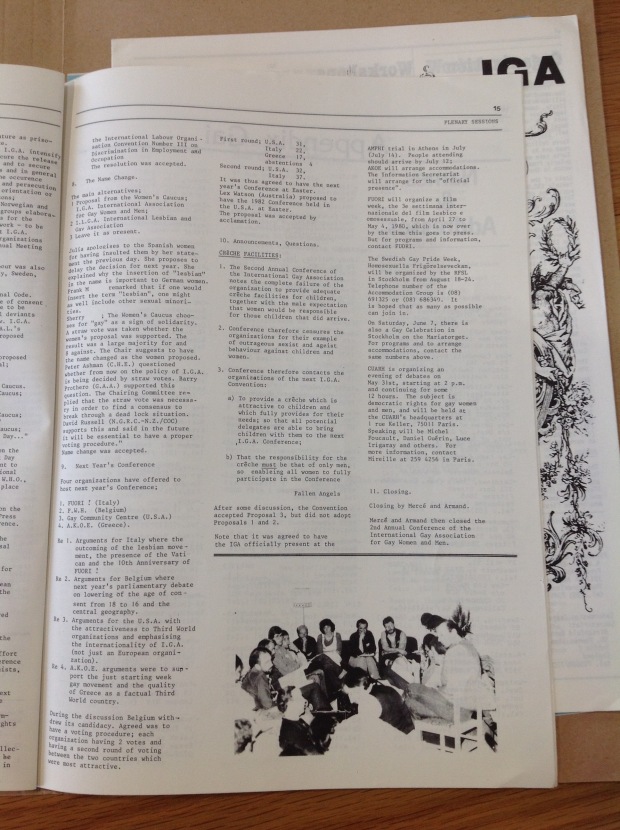