Written for and circulated at the Campaign for Homosexual Equality annual conference held over the August Bank Holiday in 1979, this double sided A4 ‘leaflet’ bears the sentence “p&p by the London Gay Activists Alliance”.

However, judging by the writing style and common idiosyncrasies of typewriter keys, the author is one third of the Fallen Angel team that attend the IGA Conference in April 1980 – Tim Brown.

“Children. Caged by adults. Powerless objects of parental desire, trapped in a society which legislates against assertions of their being – and audits their owners.

So who do the oppressors blame for all the harm they do to “their” children? Why Paedophiles silly. Who else?

The Paedophile Information Exchange (PIE) is a small – about 150 members and falling thanks to persecution. But there are millions upon millions of “paedophiles” in this tiny island of 56m people — in fact every nuclear family is teeming with them. From the exquisit privileges of being boss-man of the family to the sweet dreams of Motherhood where amongst the nappies and garbage bins lies the true reward of being able to hold ones loved “little one(s)” in a tight and seemingly everlasting embrace.” 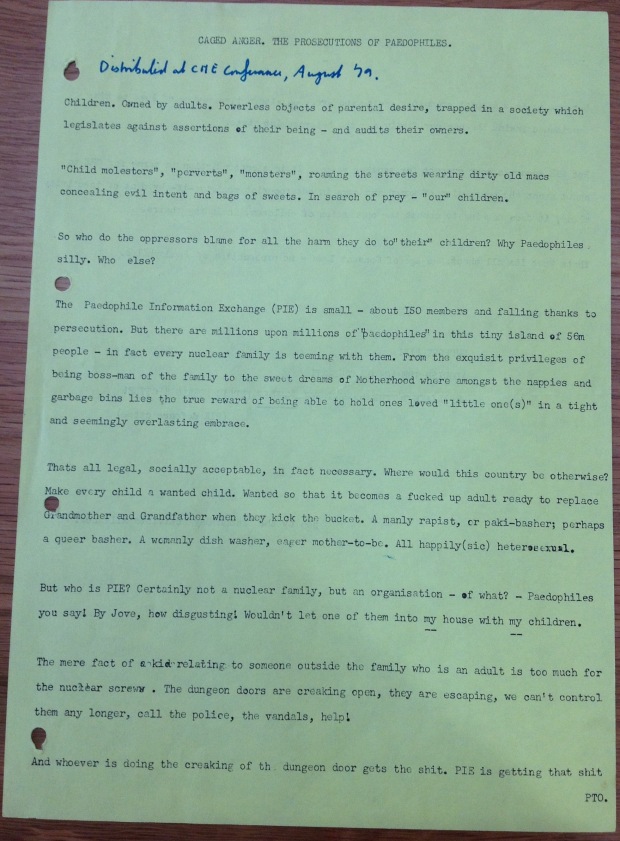 The mere fact of a kid relating to someone outside the family who is an adult is too much for the nuclear screws. The dungeon doors are creaking open, they are escaping, we can’t control them any longer, call the police, the vandals, help!

And whoever is doing the creaking of the dungeon door gets the shit. PIE is getting that shit because it is a support group for adults who offer an alternative source of love to kids imprisoned inside the nuclear family and the heterosexist state.

But PIE deserves your support for another reason. It is a contradiction in terms for CHE to shout about the oppression of women and gays in heterosexist society — if — by dint of inactivity alone, it does nothing to combat the oppression of children, including theirs.

That’s what its all about. No Age of Consent laws =  no prosecution of Paedophiles.

SUPPORT PIE!
ABOLISH THE AGE OF CONSENT!
AFFILIATE TO THE “CONSPIRACY  AGAINST PUBLIC MORALS” CTTEE! 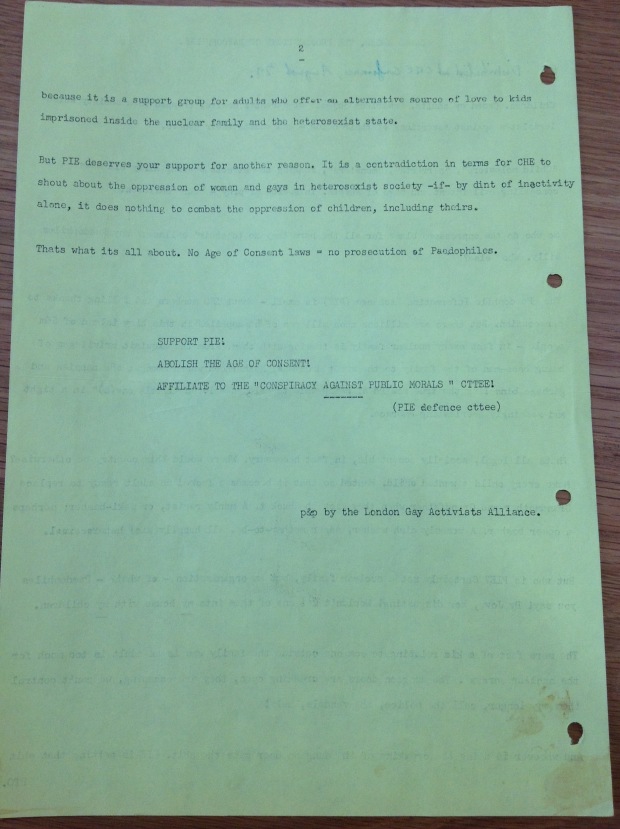