A few days before the launch of Stamford’s Mayfair Cinema Club which he will be attending, De La Noy decides Stamford’s publication Spartacus could be used to insert 1,000 mail shot letters from Lord Beaumont (the Trust’s Chairman at the time) asking for funds for Albany Trust. Interestingly out of 5,000 letters, 1k are reserved to go to homes in Chelsea and 1k to Nottingham – why target these two areas in particular? Chelsea’s wealthy and influential residents are an obvious target for scooping up money and clout for the Albany Trust but why did the Albany Trust feel particularly assured of a good return of Deeds of Covenant from Nottingham? A further 1k are going out on ‘a very specialised mailing list’ held by the Trust. 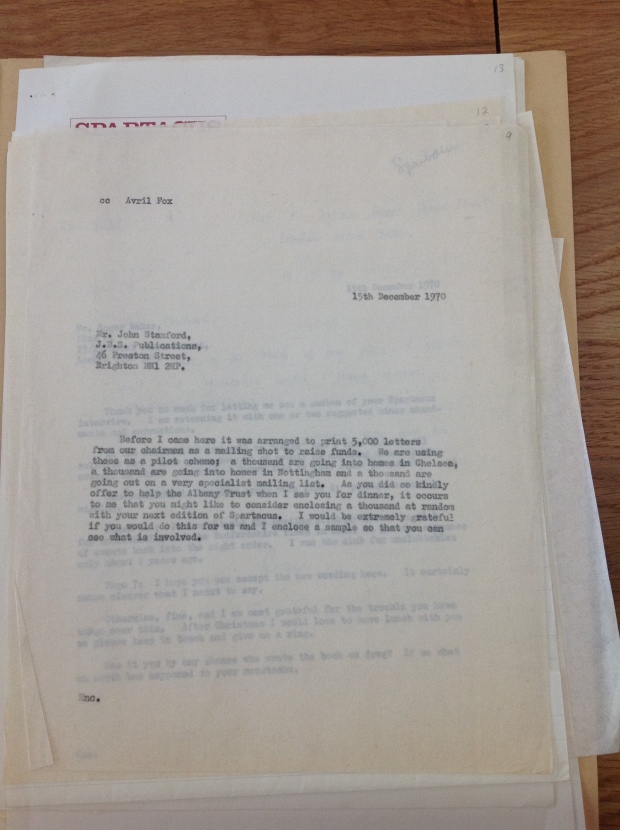 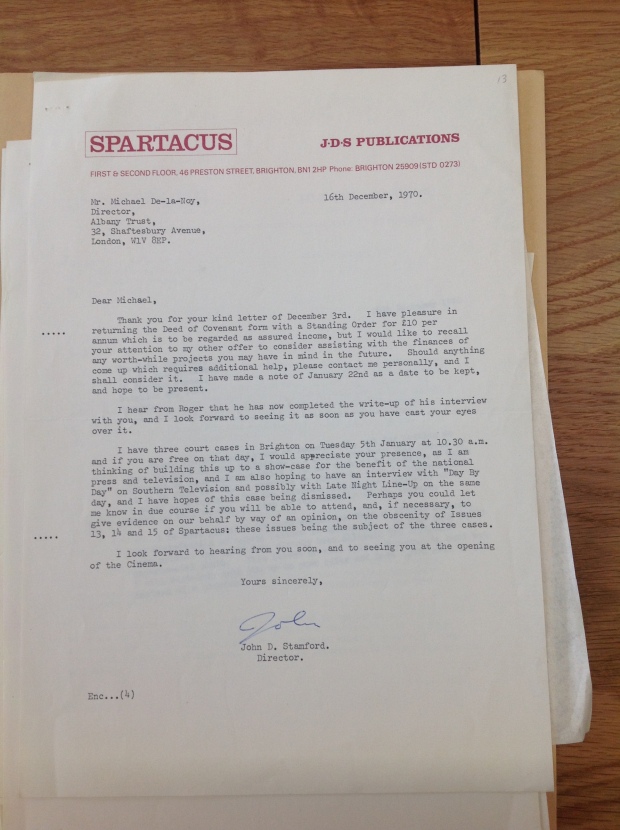 Quite possibly De La Noy’s letter of 16th December and Stamford’s response above crossed in the post, but it quickly becomes clear that taking any offer of help from Stamford comes at a cost.

“I have three court cases in Brighton on Tuesday 5th January at 10.30am and if you are free on that day, I would appreciate your presence, as I am thinking of building this up to a show-case for the benefit of the national press and television, and I am also hoping to have an interview with ‘Day By Day’ on Southern Television, and possibly with Late Night Line-Up on the same day, and I have hopes of this case being dismissed. Perhaps you could let me know in due course if you will be able to attend, and, if necessary, to give evidence on our behalf by way of an opinion, on the obscenity of Issues 13, 14 and 15 of Spartacus: these issues being the subject of the three cases.

I look forward to hearing from you soon, and to seeing you at the opening of the Cinema.” 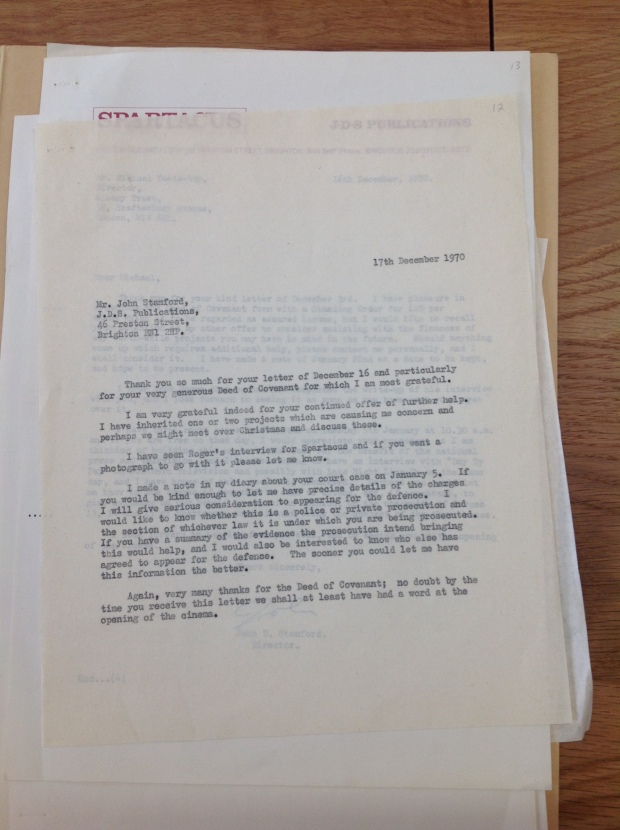 De La Noy entertains the idea of appearing for the defence and it appears that Stamford had enclosed the 3 Spartacus issues with the completed £10 p.a. (in today’s money approx £150) Deed of Covenant (see above 4 encl.) for his assessment. The next day, a Thursday, was the opening of the Mayfair Cinema Club so Stamford and De La Noy would be meeting in any event.

“I made a note in my diary about your court case on January 5. If you would be kind enough to let me have precise details of the charges I will give serious consideration to appearing for the defence. I would like to know whether this is a police or private prosecution and the section of whichever law it is under which you are being prosecuted. If you have a summary of the evidence the prosecution intend bringing this would help, and I would also be interested to know who else has agreed to appear for the defence. The sooner you could let me have this information the better.

Again, very many thanks for the Deed of Covenant; no doubt by the time you receive this letter we shall at least have had a word at the opening of the cinema.” 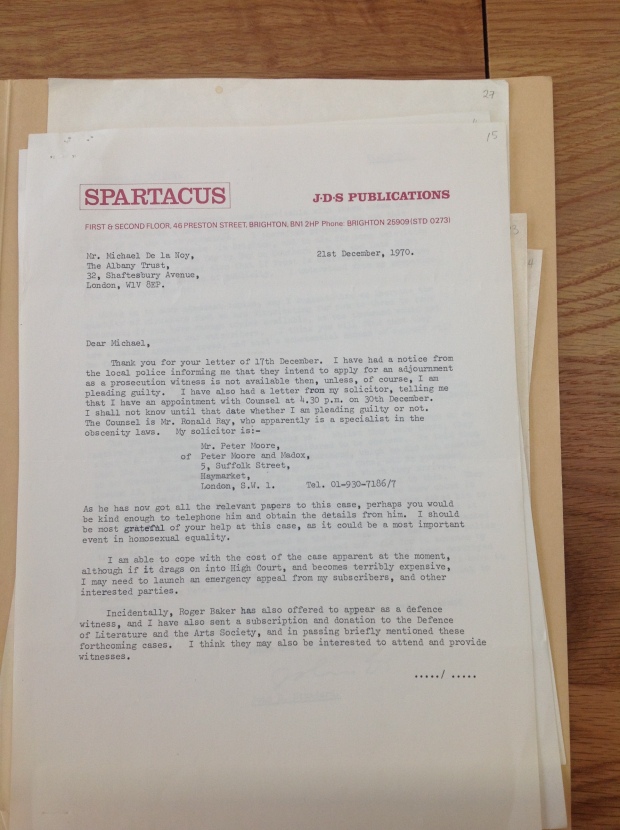 Stamford still can’t help his imperious tone and directs De La Noy to contact his solicitor directly and ask him for the details of the case, “I should be most grateful of your help at this case, as it could be a most important event in homosexual equality.”

“I am able to cope with the cost of the case apparent at the moment, although if it drags on into High Court, and becomes terribly expensive, I may need to launch an emergency appeal from my subscribers, and other interested parties.

Incidentally, Roger Baker has also offered to appear as a defence witness, and I have also sent a subscription and donation to the Defence of Literature and the Arts Society, and in passing briefly mentioned these forthcoming cases. I think they may also be interested to attend and provide witnesses.”

See further blog post on the DLAS and their 1978 approach to PIE for an article on how pedophiles’ freedom of speech was being curbed, all orchestrated by Antony Grey:

“An extensive press coverage seems inevitable with these cases now that my name has become a news item, I feel that it is wise to use this publicity to the best advantage. I therefore propose, after the cases, to hold a Press Conference in Brighton and to aim for some television appearances, possibly on Day By Day by Southern I.T.V. and Late Night Line Up on BBC2. I feel also that if Frost is operating again by then he may be a useful source of publicity. I understand from my grapevine that he is sympathetic.”

Stamford, aside from casting aspersions on Frost without any further details (for example he doesn’t say he’s a Spartacus subscriber which would be in the realm of his direct knowledge so it’s difficult to assess how far his grandiose self-image blurs his vision as to those he considers ‘supporters’) then refuses to listen to De La Noy over the amount of fund-raising letters available for insertion in Spartacus and requests more than a 1,000. How many subscribers does Spartacus have if “one thousand would not go very far amongst our subscribers.”

“I think you will find that they are a fairly generous crowd, and that a substantial amount of support will be forthcoming”

“The police visited Mr Colin Campbell Young at his home in Edinburgh on an entirely different matter, not concerning us. Whilst they were there, they asked him if he had anything which he considered to be obscene. He told them that the only thing he had were copies of Spartacus, which he did not consider to be obscene. The police asked if they could see them, and he produced issues 13, 14 and 15, together with the envelopes in which they arrived. They asked him if they could borrow the copies, and he agreed to this. They took them away. He heard nothing from then, and the next he knew about it was when I telephoned him and told him of the summonses. I have asked him to appear in court on my behalf and he hopes to be able to do so. I think it might be an important point to note that all these postal packets had reached their destination, and had been opened by the addressee long before the police knew of their existence. They were also ordered and paid for in advance by Mr Young, although his subscription form has almost certainly been destroyed by now , as we do not keep these old records. All further details will have to be obtained from Peter Moore, and I shall let him know you will contact him.”

Note that Stamford is not De La Noy’s obedient servant in his sign-off, reserved it seems for letters to Lord Beaumont alone. 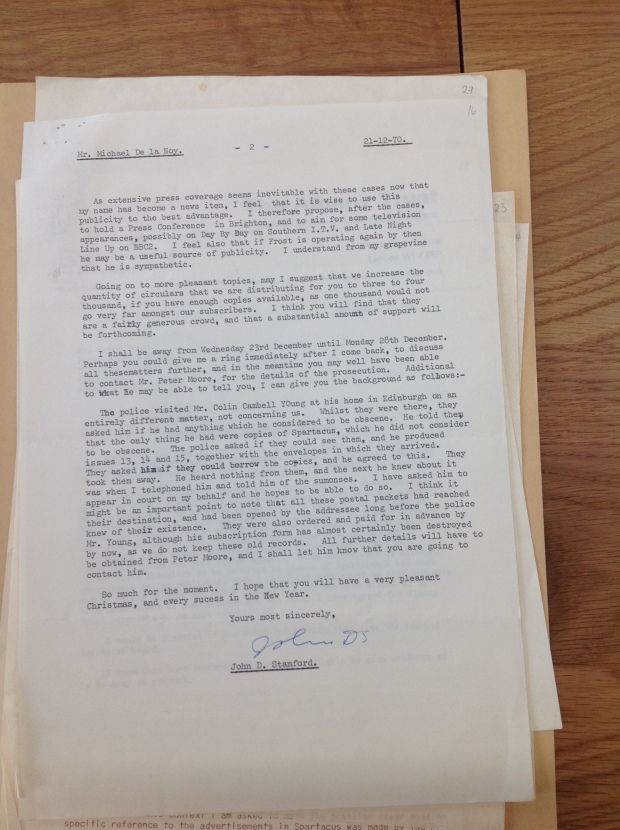 In reply on 28th December 1970 De La Noy tries to reiterate to Stamford that he wishes Stamford’s solicitor  to contact him with further information and a request to be a witness for his defence and also repeats himself as to the limited number of 5,000 printed fundraising letters from Lord Beaumont, but relents to give Stamford an additional 1k to insert meaning the remaining 2,000 Albany Trust fundraising letters were distributed to Spartacus subscribers. 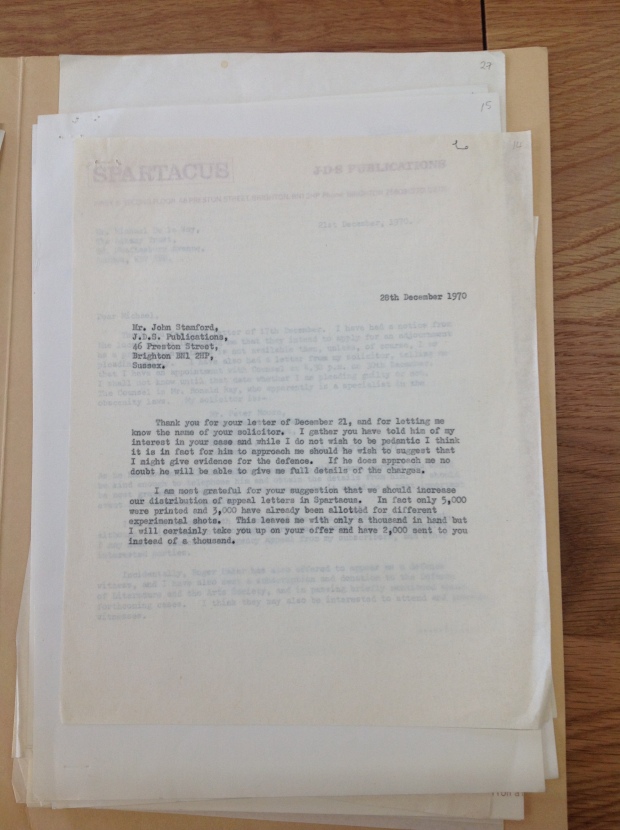 Would be interesting to find out if ITV and BBC2 have any footage of Stamford being interviewed in January 1971 (that is if the case does progress to court and Stamford doesn’t plead guilty which will become clearer as I process more documents and post here). One wonders what happened to the Mayfair Cinema Club and how long it remained open for, and also whether it was actually located in Mayfair? And how long had Stamford been operating Spartacus for by 1970 to become so incredibly wealthy when he’d previously been a minister?

John D Stamford, self-styled Leader of the 1960s British Homophile community and beyond is not best pleased with Lord Beaumont’s reply requiring him to fill out an application form and doesn’t reply for over a month, although he remains Lord B’s ‘obedient servant’ if somewhat disgruntled when he does reply:

“I am returning your application form as the details required were given in my previous letter, and a person in my position should not be asked to fill in an application which one fills in for a post as a junior clerk. I did say in my original letter that no form of salary would be required by me, should this offer still stand, and should you still wish to interview me.” 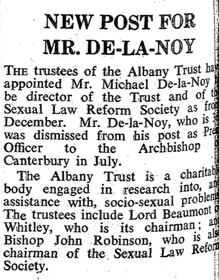 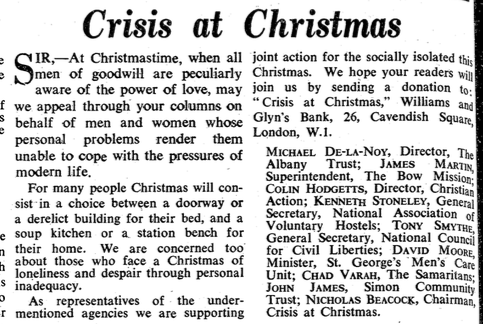 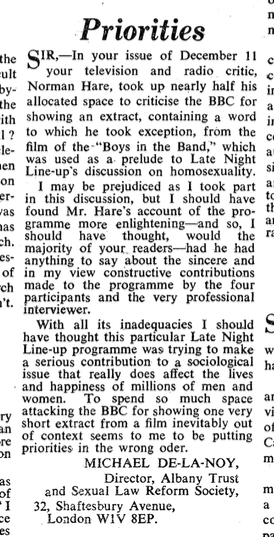 The Albany Trust has by this point employed Michael De La Noy as Director and Lord Beaumont replies to inform Stamford of this, although he hopes that Michael and the Trust “will be able to take advantage of your kind offer” presumably in monetary terms.

However by the time Lord Beaumont (Tim to Michael seeing as Michael was formerly his assistant editing Prism from 1965, a radical church publication and they are well known to one another) writes an informal memo to De La Noy on 7th December  stating,

“Antony says that this man is bad news, but if you look at his original application he appears to be swimming in money and therefore I suggest it may be well worth your while getting in contact with him fairly soon,”

Michael has already seized the initiative and

(1) been for a ‘delightful dinner’ with Stamford and his Spartacus colleagues the Tuesday before and the very  next day writes a letter to Stamford thanking him and applying for membership of the new Mayfair Film Cinema Club which Stamford and others will be opening on 17th December. De La Noy also invites Stamford to an Albany Trust fundraiser at the crypt of St Martins in the Fields to be held on 22 January, telling Stamford

“I very much appreciate your concern about the Albany Trust and your obvious desire to help me. I do hope we shall find many ways of working closely together.”

(2) Met up with Roger Baker on Friday 4 December, a Spartacus journalist, in Shepherd’s Bush for a ‘programme that went quite well’ and arranged to be interviewed by him on the work of the Albany Trust for Spartacus 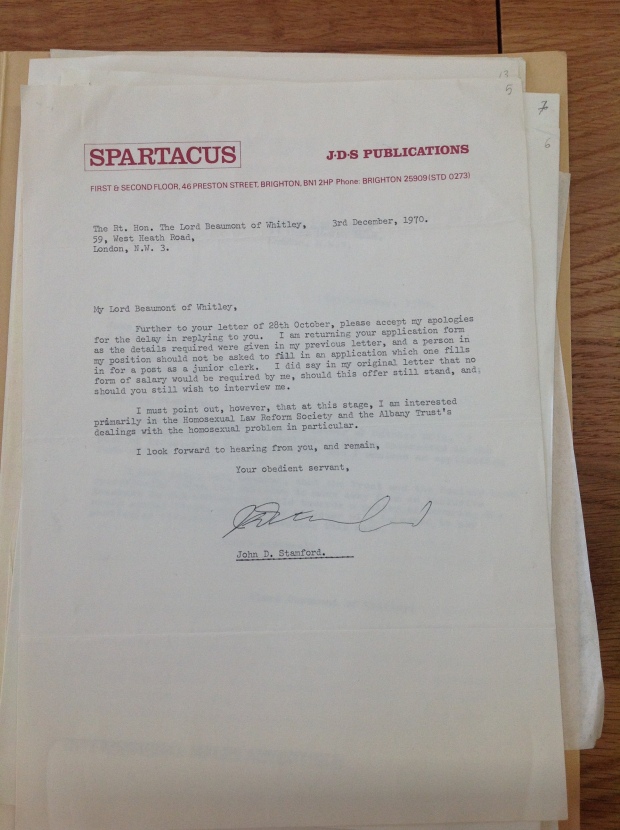 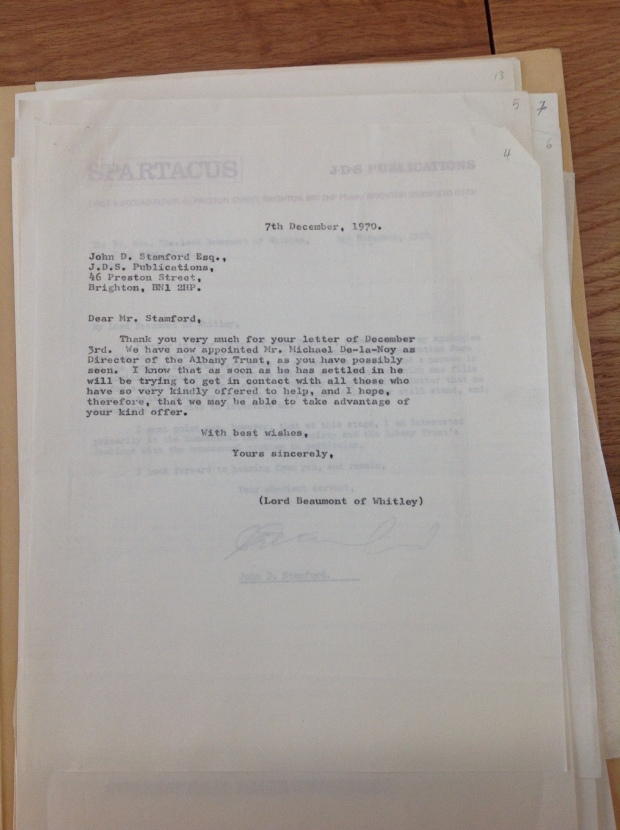 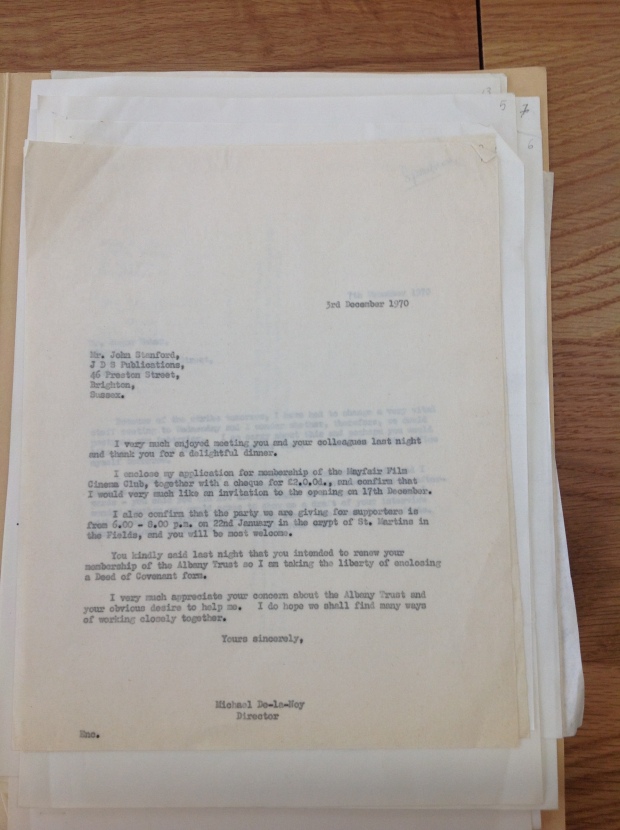 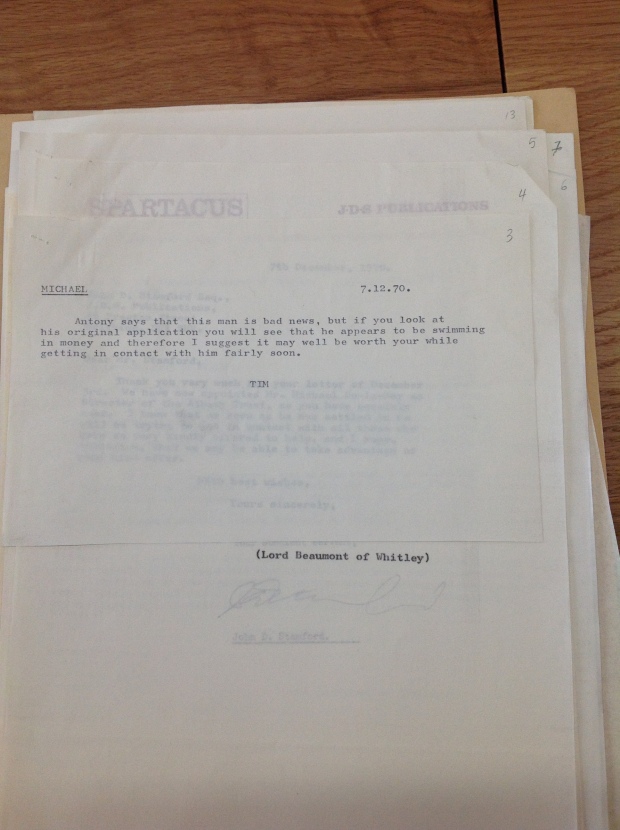 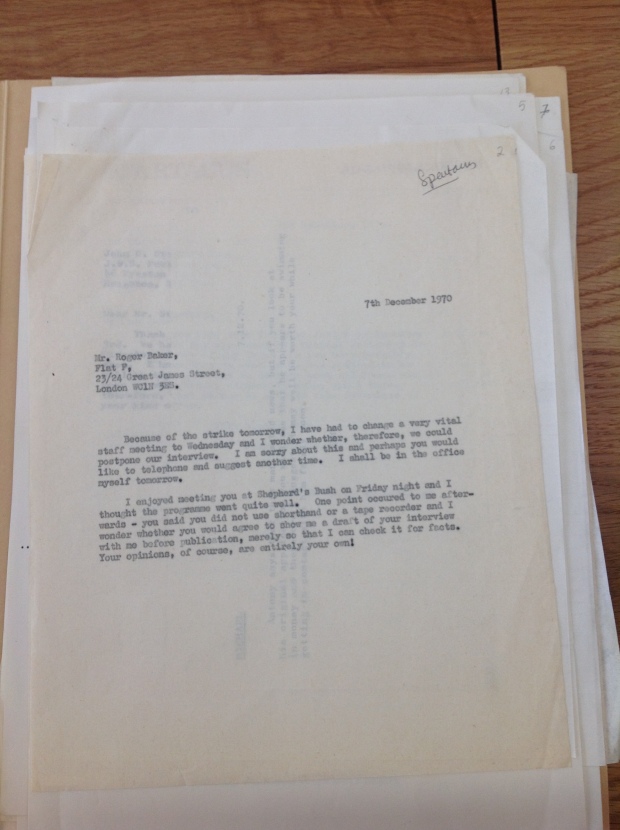