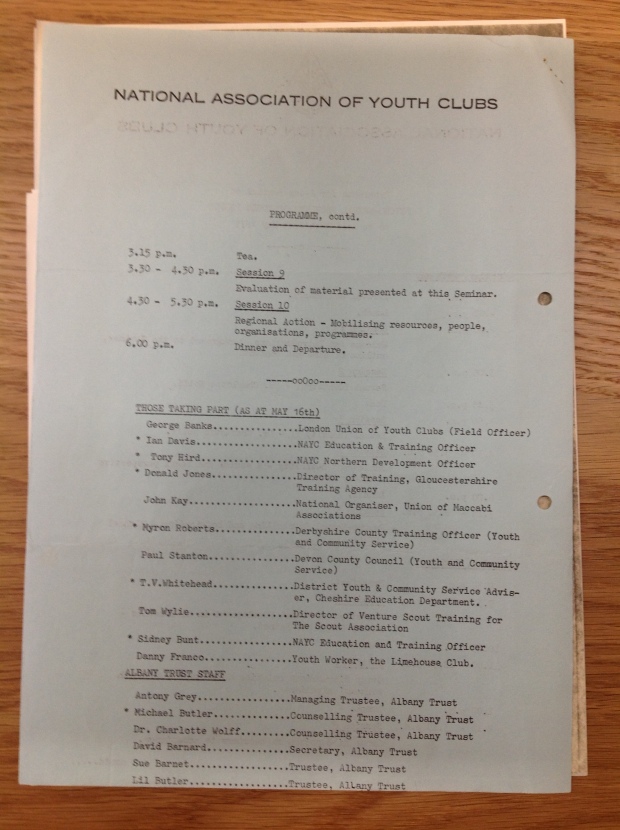 In May 1975 David Barnard (Organising Secretary – Albany Trust) and Antony Grey (Managing Trustee – Albany Trust) were corresponding with Sidney Bunt the Training Officer of the National Association of Youth Clubs. Since autumn 1974 the National Association of Youth Clubs had been working with the Albany Trust to set up a 2 day training conference on youth sexuality for people who train youth workers, ‘multipliers’ to cascade the training.

Rev Michael Butler, the Trust’s Counselling Trustee (and to whom Robin Bryans had reported Father Colin Gill’s abuse of boys) would be relying on Sidney Bunt to arrange his overnight accommodation for the conference being held at NAYC’s offices on 30 Devonshire Street on Wednesday 28 and Thursday 29 May

The Chairman of NAYC at the time was Dennis Stevenson was later to become Baron Stevenson of Coddenham of Suffolk, HBOS chairman for 7 years, raised to the House of Lords by Tony Blair in 1999, but at the time was recently married and just started a new job. His credential for chairmanship  of NAYC stemmed from having conducted research reports into youth clubs and pop festivals at the Prime Minister Ted Heath’s request.

These included chairmanship of the National Association of Youth Clubs (where he met his great friend, Peter Mandelson) and being asked by Ted Heath, then Prime Minister, to head a study into pop festivals.

His day job had been since 1971 as Head of Newton Aycliffe and Peterlee New Town Development Corporation (NPDC). By 1977 Stevenson had chaired two HMSO reports for Department of Education:

Sir Harold Haywood’s involvement with NAYC is listed as having ended in 1974 although its not yet clear as to why, and in February 1975 it was announced he and 3 other new trustees were joining the Albany Trust. Before joining the Albany Trust he had already become Director of the Education Interchange Council involved in facilitating foreign exchanges for educational purposes.

Six months after joining as a trustee, in September 1975 Haywood will take on the Chair of Trustees role at Albany Trust, meet with a number of Paedophile Information Exchange committee members including Peter Righton and lead the way in writing to the Guardian to ask of child prostitution rife at Playland’s Piccadilly Circus and Charles Hornby’s involvement, ‘Who was exploiting whom?’ It is during Haywood’s 30 months with the Albany Trust that they team up with the Paedophile Information Exchange to co-draft a Q&A booklet on Understanding Paedophilia which asserts child abusers are a social benefit without whom voluntary services and youth welfare work would be practically impossible – essentially pedophiles as a ‘free’ source of labour for social services – but at what price?

However, Haywood as Chair of the Trustees was not Antony Grey’s first choice. In autumn 1974, just as PIE was setting up, Grey was casting around for a high profile Chair to further the Trust’s ‘respectable’ image.

He chose to ask Sir Peter Morrison’s sister-in-law – Sara Morrison – wife of Devizes MP Sir Charles Morrison, who was still in position as Vice-Chair of the Conservative party and Sir Peter was preparing to back Thatcher in February’s Tory Leadership election. Sir Peter had only joined the House of Commons in February 1974.

Although she declined, her introduction to Sir Keith Joseph proved useful to Grey who at the time was Savile’s MP (Leeds NE). For more on the history of Anthony Blunt’s Gothic-pederastic cult formed around William Beckford at the Lord Margadale estate of Fonthill (Lord Margadale was Sir Peter and Sir Charles Morrison’s father) read further: PIE Raids, William Blake and Lord Margadale’s estate at Fonthill, Wiltshire

Despite Haywood’s departure, with his London flat at 22 Park Crescent round the corner from Devonshire House NAYC HQ Savile stopping by was still a frequent occurrence and he maintained close links with both NAYC and PHAB beyond Haywood’s tenure.  During 1974 and 1975 Savile was holding annual fundraising events ‘Tea-rific’ for NAYC and while writing his autobiography (published in 1974) referred to himself as Vice-President to Angus Ogilvy’s President. In 1974 Savile had also become Honorary President of PHAB when it became an independent charity.

Savile ran many marathons for PHAB, including the half marathon round Hyde Park, undertaking PHAB sponsored walks in Jersey and Northern Ireland. During Haywood’s time in 1970 PHAB had launched a TV fundraising appeal with Cliff Richard fronting the advert. Cliff along with Savile, Rolf Harris and Ed ‘Stewpot’ Stewart were to become four major entertainers appearing publicly for PHAB fundraising.

Did Savile have access and opportunity to abuse vulnerable children and teenagers (some of whom had physical disabilities) at NAYC and PHAB Discos? Will these two charitable organisations be able to safeguard children against abuse by celebrities or public figures in future if they haven’t already reported on how Jimmy Savile or Rolf Harris came to be involved in their fundraising, invited into positions of authority by whom?

In 1971 Savile had started the Dymomania treasure Trail fundraising event at the Post Office Tower and on 15 July 1973 hosted a PHAB BBC Radio 1 Speakeasy. With the Earl of Snowdon as Patron of PHAB and the Queen Mother as Patron of NAYC Savile had increased access for networking with royalty.

21 October, 1981. The Times. ‘Reception.’ ‘The Earl of Snowdon, Patron of PHAB (physically handicapped and able bodied) and Mr Jimmy Savile (president) were hosts at a reception and dinner held at the Mount Royal Hotel yesterday to launch the charity’s silver jubilee celebration for 1982. Among the guests were: Mr Hugh Rossi, Minister of state for Social Security and the Disabled […].’

Savile and the PHAB Russian Princess

“After retiring from the beloved City I went to work for Mecca Leisure, on the edge of show-business, where I met JS several times. At the Cafe de Paris , Coventry Street, the manageress Avril Matthews McClay, a singer, had been through a traumatic experience when her husband and child had been killed in a plane crash and she had been nursed by JS in Stoke Mandeville Hospital. At the Cafe de Paris there was a charity evening for the disabled. The Royal Marines turned up in uniform to carry the disabled inside and Jimmy Saville arrived with a Russian Princess. Paul Daniels also later arrived in support of Avril to give a free show of magic which was amazing. A lot of money was raised for the disabled-related charity PHAB (Physically Handicapped Able Bodies).”

The Russian Princess, Princess Jean Galitzine, was recently honoured in 2012 for her services to PHAB, a former 1950s Dior model who had married Prince George Galtizine, a major in the Welsh Guards

“After the Bolshevik revolution, Katya’s grandfather, Prince Vladimir Galitzine, fled his Russian homeland to become an antiques dealer in Paris. His extrovert son, Emmanuel, was a Spitfire pilot during the war and held the record for the RAF’s highest altitude combat with the Luftwaffe. Katya’s father, Prince George Galitzine, was a major in the Welsh Guards, while her mother was the Dior model Jean Dawnay.”