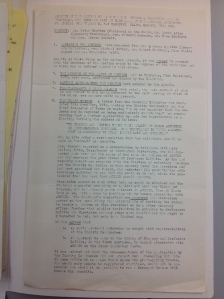 Within 9 months of starting ACCESS Righton’s ‘enforced withdrawal’ from Chairmanship takes place due to potential adverse publicity  – just after The Times announces him as Director-Designate heading up a two-man team at the National Children’s Bureau. [ https://spotlightonabuse.wordpress.com/2013/12/16/the-national-childrens-bureau-12-05-93/

On 8th December ACCESS met at the National Institute of Social Work with only 5 attendees: Peter Righton (Chair), Doreen Cordell (Secretary), Rev. Malcolm Johnson, David Allen (Honorary treasurer, formerly in same role for Albany Trust but left due to Michael De La Noy), and Dr Theo Schlict. Looking at the minutes, it may be that Righton had already wished to make the announcement that he had been forced to step down as Chairman at the 8th December meeting but due to the poor attendance held back his news on being ‘forced’ to step down along with Claire Raynor’s resignation.

“In spite of there being so few members present it was agreed to proceed with the business of the meeting owing to the urgency of the situation and as there was no defined quorum at this stage.”…

Item 4. The Chairman’s opening remarks were brief, the main content of what he had wished to say being deferred to the next meeting at which it was hoped more members would be present.”

On taking advice from their honorary solicitor (Ambrose Appelbe – also Hon. Solicitor for the Albany Trust) regarding redrafting their application for charitable status with a more medical emphasis, all due to a disappointing reply from the Charity Commission, Peter Righton suggests seeking the patronage of Father Trevor Huddleston, Bishop of Stepney for Vice President “or some other honorary office”.

Anti-apartheid campaigning Huddleston was the subject of headlines planned and then spiked by John Junor of the Sunday Express during mid 1974, (less than two and a half years after Righton’s suggestion to seek his patronage for ACCESS on Total Sexuality). When accused of ‘sexually harassing’ two school age boys by their mother, both the Bishop of London and the prebendary of Fleet Street’s St Brides got together to quash John Junor’s threat to publish an article.

Huddleston’s obituary for the Independent, written by former Albany Director Michael De La Noy (who gives the impression of a man intent on blackmailing Lord Beaumont and Archbishop of Canterbury, Michael Ramsey), stated Trevor was moved from Stepney to the Indian Ocean of Mauritius in 1978 to ‘hush up a scandal which will raise a few eyebrows today.” De La Noy appears to have been someone who never shied away from an opportunity to point to what he knew about Anglican prelates’ sexual proclivities in print.

All the South African intelligence service BOSS’s files on Trevor had been shredded according to Canon Eric James who searched for them when writing his biography of Huddleston during the 1990s.

“5. Charitable Status: Discussion ensued on such other help as could be obtained and the Chairman suggested arranging an appointment with the Bishop of Stepney, who had already shown interest in ACCESS through Canon Eric James, with a view to inviting him to become associated with ACCESS. The Chairman’s suggestion was approved and discussion ensued on the possibility and advisability of inviting the Bishop to become a Patron or Vice President or some other honorary office…”

5b. An approach to be made to the Bishop of Stepney and Professor Lafitte in the first instance to become associated with ACCESS on the lines indicated above.”

“6. Toynbee Hall: ” It was reported that a letter had been received from the Resident Director of Attlee House, Mr Richard Pentney, dated 23rd November 1971, on behalf of the Warden of Toynbee Hall and himself.”

The Warden of Toynbee Hall was Jack profumo, who Doreen and Righton had met during October/November [insert link to post on Lord Beaumont’s Letter(s) & Peter Righton meets Jack Profumo). Remarkable to think of Macmillan’s former Secretary of War sorting premises for where MI5 blocked Dr Robert Chartham/Ronald Seth and Peter Righton sought to take over the Albany Trust’s counselling case files, all as part of his atoning ‘good deeds’.

By Monday 24th January 1972, Doreen Cordell was looking for nominations for a new Chairman for ACCESS.

“I would refer to my note about Mr Righton’s enforced withdrawal from the Chairmanship of ACCESS and our request that nominations should be received by me prior to the next meeting, at which Dr Theo Schlict has agreed to take the chair.”

Dr Chartham/Ronald Seth, although unable to attend because Wednesday was his clinic day (where?), appeared keen to take the reins but wasn’t available until July and wanted Dr Theo Schlict while on sabbatical (from Royal Northern Hospital, Holloway Road?) to take temporary charge

In a letter to (later to be Albany Trustee) Dr Charlotte Wolff, Doreen writes also on 24 January 1972:

“I am hoping that Peter will retain the Chairmanship of the Counselling & Training sub committee (which does not necessitate public identification and is essentially his special sphere) because this is very important and it is vital that we get a training scheme off the ground and that we establish a reliable roster of vetted people to help at Toynbee.” [My emphasis]

No trace of irony from Doreen using the term vetted in the same sentence as Righton and his ‘enforced’ resignation.

“At the January meeting Dr Schlict agreed to take the Chair, at least for the time being. We did not proceed to electing Robert into the Deputy Chair because we only had a small number and it was felt that this should be done, if at all, with a more representative group. I also explained how you felt about things, which was understood. Claire Raynor insisted to Peter that her resignation went forward so we accepted that.”

“Peter has retained the Chair of the Counselling & Training Sub Committee, thank goodness, and as, you know, it only comprised Theo, Michael Butler and Peter…”

On 26th January 1972 Dr Theo Schlict took over as Chair of ACCESS and David Allen, Peter Righton, Rev Malcolm Johnson and Mrs Doreen Cordell all attended. Claire Raynor’s resignation was finally announced having been given to Righton before the 8th December meeting, and one room at Toynbee Hall was ready with the telephone connected as promised, radio

“i. Mr Righton outlined the situation which had arisen in connection with his new appointment which precipitated his enforced resignation as Chairman. He re-affirmed that this did not imply any loss of interest or confidence in ACCESS or the cause it sought to promote and he was willing, subject to the concurrence of the members, to remain on the committee to give such service as he could as an ordinary member. He expressed thanks to Dr Schlict for agreeing to preside in the emergency.”

ii. Nominations for the Office of Chairman Members had been circulated as to the situation and nominations had been called for.

Righton’s step down appears to be related to the need to stress that membership of ACCESS was done ‘on a personal basis rather than on a representative basis of any other organisation’. How had his new appointment at the National Children’s Bureau precipitated his resignation? Had  this been requested as a condition of his appointment at the National Children’s Bureau? And if so, how and whose decision at the NCB had it been to ask Righton to step down?

Another consequence of Righton’s step down was that he’d not been able to approach the Bishop of Stepney and it was therefore decided Rev. Malcolm Johnson would do this. 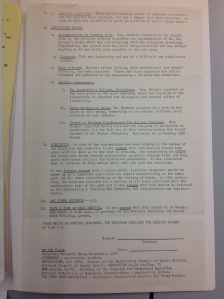 Meanwhile back at the Albany Trust, Edgar Wright (Antony Grey) was firmly back in control and Dr John Robinson, former Bishop of Woolwich and Dean of Trinity College, Cambridge was putting the case for the age of consent to be lowered to 14