1. May 1971: In which Righton & Cordell establish ACCESS with Dr Robert Chartham (aka Ronald Seth – of potential interest to MI5) named on a draft trust deed and plan to takeover Albany Trust’s counselling casework files

2. July 1971: In which Righton gets called to the House of Lords by Lord Beaumont, ex Liberal party Chairman & Treasurer for an emergency meeting of the 12 friends of the Albany Trust

3. September & October 1971: In which Righton and Dr Chartham realise they will have to get the Trust’s counselling casework files via less confrontational means and Righton takes advice from Jack Profumo [see below]

5. December/January 1972: Righton’s ‘enforced’ resignation as Chair of ACCESS [to be posted]

Canon Eric James declined Peter Righton’s invitation to take up a position as a Trustee and deferred to him allowing Righton to become Trustee as well as Chair of ACCESS and ultimately Head of the Training Sub-Committee he establishes.

When Righton had left for his summer holidays shortly after the July House of Lords emergency meeting of the 12 Friends of the Albany Trust, all had seemingly been settled. Righton had defended Doreen’s involvement staunchly to Lord Beaumont despite Michael De La Noy’s refusal to communicate or even set eyes on her and Beaumont had agreed. Over a three month period the counselling casework and referrals would be handed over to ACCESS.

“The subsequent discussion between the Chairman and Lord Beaumont took place on this decisions when agreement was reached on the following points:

i. The Chairman had been informed that the Trustees and the Director had agreed that the referral and counselling work of the Trust should, at the end of a 3-month period, be taken over by ACCESS

iii. Neither the Trust nor ACCESS, it was agreed, would engage in publicity about the takeover otherwise than by mutual agreement after a meeting of representatives of both organisations and publicity at a properly convened press conference.

Subsequent publicity: The Chairman outlined events which followed from the telephone request from the Director on behalf of Lord Beaumont to Charlotte Wolff and Michael Schofield’s refusal to accept the Secretary at the proposed meeting, which he then cancelled. This was followed by a circulation from Lord Beaumont to those attending the advisory meeting thanking them for their presence and confirming the arrangement made with the Chairman. However, simultaneously a wide circulation had been sent out by the Director which had also been quoted in the press stating that the referral and counselling would, in future, be transferred to Michael butler and a team of trained Samaritans. The Chairman understood that this had done without Michael Butler’s knowledge or consent. Had caused him great difficulty as, being unable to attend the advisory meeting, he had simply indicated that, in an emergency, he was prepared to continue backstopping the casework, as he had been doing since February, but only as a temporary measure.

d. Future relationships: The Chairman explained that one of the reasons why the meeting had been postponed was because he had hoped to be able to have some discussion with one of the Trustees but this had not been possible. He pointed out that ACCESS had kept to the agreement on every point but the Albany Trust had committed a breach of this. In view of all the circumstances, the Chairman said he felt disinclined to have contact with the Director of the Albany Trust except in the presence of other witnesses in which he was fully supported by the committee.

Dr. Chartham stated he had written a letter to Lord Beaumont, following the publicity regarding the casework, which was read to the meeting and with which the meeting concurred.

After discussion, it was agreed that the Chairman and Dr Chartham should together make one more attempt to arrange a meeting with Lord Beaumont.

It was further agreed that irrespective of the arrangements made by the Albany Trust, the committee should proceed with its own arrangements as a matter of urgency.” 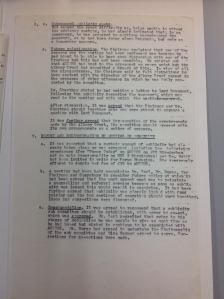 On 21 October 1971 ACCESS met for the fourth time. Lord Beaumont had replied to Dr Robert Chartham’s letter, agreeing, again, entirely to the handover of Albany Trust’s counselling casework within 3 months. However according to the minutes Dr Chartham wasn’t sharing the contents of the letter he’d received subsequently. Was this from Lord Beaumont too? There was much concern amongst the ACCESS group that personal details of who had been counselled for what discussed in committee at Albany Trust were going to be published by Michael De La Noy. For some reason Dr Theo Schlict was particularly concerned over the level of detail he had put into specific Albany Trust counselling casework files, above and beyond his normal approach. It was agreed to try and ignore Michael De La Noy’s threats, pretend the transfer to Rev. Michael Butler of the Samaritans was going ahead, and then negotiate the casework files into the hands of Righton and ACCESS.

“The Chairman explained that this related to the future relationship between ACCESS and the Albany Trust and asked members to check the record of his report to the last meeting most carefully for accuracy, which was done to the satisfaction of the committee.

He stated that he had given careful thought to the situation as it now existed and had decided not to go ahead with a meeting with Mr Michael Schofield as the work which ACCESS had set itself to do was in no way the concern of the Trust. In his opinion, when ACCESS was ready, negotiations would take place with Michael Butler and the Samaritans, and he felt it would complicate matters to an unbearable degree if an approach was made to Lord Beaumont.

One remaining serious matter was the question of the records which had already been discussed in committee. It was already known that if this issue was raised it would cause great difficulty so far as the trust was concerned.

The Chairman enquired if Dr Chartham had received a reply to the letter he had sent to Lord Beaumont which he had read to the last meeting to which Dr Chartham stated that Lord Beaumont had agreed with its entire contents. He had had a subsequent letter which was private and confidential.

The concern of ACCESS in the record situation was related to its takeover of the casework complete and the possibility that this material would be used for publication purposes without the consent of those involved. Dr Schlict added his concern since he had written confidentially in greater detail than he would normally do to an agency on certain cases.

In discussion it was pointed out that the case records were legally the property of the Trust and it was agreed that ACCESS should proceed with its own identity and negotiate with the Rev Michael Butler for the necessary transfer without further reference to the Albany Trust.”

But however dispiriting Righton found the continued failure to wrest the trust’s counselling case files from De La Noy’s hands, in other news he and Doreen were able to report to the Committee they’d met Jack Profumo down at Toynbee Hall in the East End with some positive outcomes for fundraising and somewhere ACCESS could call home.

Before long ACCESS would be settled in the East End at 35, St George’s House, Toynbee Hall, 28 Commercial Street in one of London’s most significant charitable institutions and the first university settlement [for more on Mansfield Settlement and the conviction of Sir Ian Horobin MP a decade earlier for abusing boys in the East End see here]. 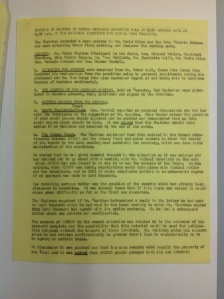 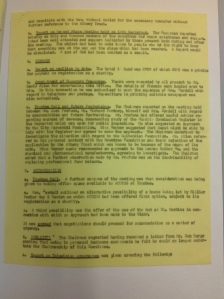 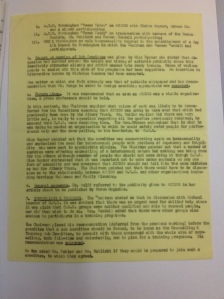 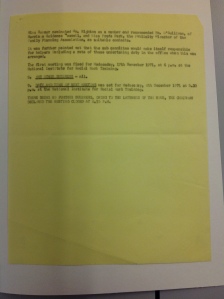